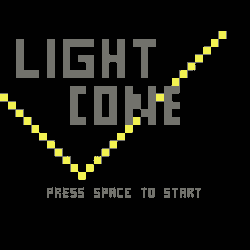 and here we have the lovely lovely title screen
I always have wanted to program some sort of game using special relativity, but haven't quite figured out a good way to do it yet. However, I did think, just recently, 'gosh, I should be able to do something with lightcones' though. So, in this simple concept game light has a finite speed, which basically means that when you see things far away from you, you're not seeing them as they are now, but rather as they were some time in the past.

I decided on simple laser weapons (which travel at the speed of light), which means that you won't ever see the ones that hit you until it's too late :D

Oh, I made it a split-screen two-player game so that you can see for yourself how the two players can see things totally differently. (but, maybe the screens are on the wrong sides...I'll fix that in the next version :-X )

I've not actually tried playing it with anyone yet; I assume that the gameplay potential in its current form is rather minimal, but I think it's still a little bit fun, and I might work more on it in the future.

And, I have two separate versions (both with sources: the mac ones should compile on linux machines as well...).

there is some additional discussion of this over at the original tigsource thread.

Feel welcome to drop me a line at analytic@gmail.com if you've questions/comments :)

If you like what I do, consider supporting my freeware and open source work via